Pier failure in pier and beam house foundations can cause extensive problems. One of the most common types of pier failure in a Pier and Beam house is when the pier is no longer under the beam. When a pier and beam home has a foundation problem, the solution can also include attention to the drainage of the home. Foundation repair may still be needed, but to help prevent foundation problems in the future, a drainage solution may also be needed.

In this article, we’ll talk about some of the common reasons why pier and beam foundations in Dallas fail and what actions you should take.

Homeowners commonly opt for the standard pier and beam. That’s because of its ability to ward off the weather while still allowing workers, such as contractors, to access it.

The convenience of working on your home’s underside cannot be understated, however, it also leaves the door open for moisture to get down there as well. Did you know that trapped moisture can be an unwelcome menace? If anything, the native soil in Dallas has characteristics that only help compound this problem.

Have you noticed cracks in your pier and beam foundation? You are definitely not the only one with that problem. The native soil in Texas is to blame.

To put this into context, this is an all-American problem. Over half of the homes nationwide sitting on moisture-rich soil. In the end, most of these homes end up with foundation-related problems.

It is, therefore, important to know when and how your pier and beam foundation is likely to be affected. Homes with foundation issues tend to depreciate between 20 percent and 25 percent in value.

The picture here shows a robust tubular concrete pier that is no longer supporting a beam.  How can that happen?  The foundation construction had piers placed every 6 to 8 feet under the beam.  What caused the pier to fail and in fact to move? 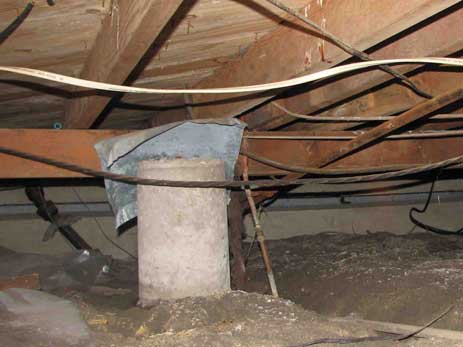 Water has caused the pier to move out from under the beam.

Atop the pier is a metal termite shield, which is now lodged between the side of a beam and a concrete pier.

The white specs atop the soil are salts. These accumulate as the soils go through wet and dry cycles.

The problem that we see is common to pier and beam houses built on expansive clay soils.   When water accumulates or passes under a house, the soil expands and causes the pier to heave. During the drying cycle the pier drops. The up and down movement is not without some lateral movement.  The problem in the picture above probably took a decade to occur.  The pier is not supporting the beam.

Two things must be done to solve pier movement under this pier and beam house:

At Granite Foundation Repair, over half of the pier and beam problems that we repair could be fixed by stopping moisture accumulation under a house.  Corrective measures may include exterior drainage correction as well as the addition of large vents under the house.

Always try to work with a reputable foundation professional when constructing or upgrading a home. After all, most of the foundation problems come as a result of poor design. It doesn’t really matter the locality in which your home is situated.

This is not a DIY affair. You don’t want to risk using an inferior jack or spacing piers wider than 6 feet apart. The design has to take into account the possibility of too much pressure being exerted on the wrong part of the foundation.
The poor design also means placing the beams further apart than should be. When you have very few piers supporting their weight, then you have a problem.

Some of the people who call themselves repair experts may leave the foundation of your home worse than when they found it. They might use wooden or cardboard shims to reinforce weakened piers. The other issue is relying on the soil itself to support the weight of the house.

The soil in Texas might be to blame, but floods can exacerbate the problem. It could be as a result of hurricanes, storms, flash floods, and tornadoes which can bring in unwanted moisture.

Don’t just worry about water when it gets into your home, think about its damage to the foundation. When wooded beams are exposed to water, they tend to expand. This can tip your foundation over.

Most parts of Texas have a high level of water in the soil. The soil has lots of holes which help raise the water level. The water in Dallas might not get above the ground level, but it is still dangerous to your home.

Be Aware of The Warning Signs

You need to be in a position to know if the worst is about to happen. But don’t worry. It will take quite a while for a sagging foundation to cave in. noticing early warning signs should help you do early repairs, cheaply.

Watch out for a sticking door, soft spots in the floor, unbalanced staircases, and cracked walls. 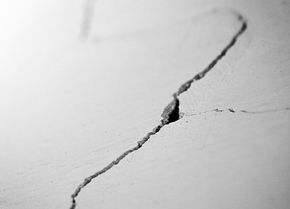 Read this article to understand the signs of foundation problems.

If you’re experiencing some signs of foundation problems don’t hesitate to reach out to us at Granite Foundation Repair. We have an experienced team of professionals to help you fix all your beam and pier foundation issues.