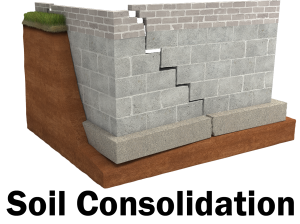 Soil consolidation causes foundation problems in many homes across America, but did you know your home may be at increased risk of foundation issues due to this cause if you live in Texas?

Soil consolidation is a leading cause of concrete slab foundation failure of houses in Dallas and Fort Worth, Texas. The soil lacks the strength to adequately support the foundation.

Soil consolidation, which we can think of as a settling phenomenon, is a problem because of our clay soil. As clay soil consolidates or settles, it loses its ability to support the foundation.

Soil consolidation is a well-recognized problem for residential and commercial builders. At commercial job sites, clay soil to a depth of three feet or more is mixed with a stabilizer, such as lye, and compacted in four-inch layers. Furthermore, the clay cannot exceed a certain moisture level during the compaction process.

During residential building site preparation, clay soil is bulldozed flat, but it is not stabilized and compressed in four-inch layers. On the surface, the soil looks flat, but at a molecular level, irregularly shaped particles of clay are situated at odd angles to one another. Over time and with pressure, the clay particles slowly sort themselves out, realigning into the same plane. This sorting out and compressing is what we refer to as consolidation.

If your house foundation has failed due to clay soil consolidation, you should consult a construction attorney as you may be able to take action against the site developer and or builder.

What is it that makes clay soil a problem to compact?

Clay soil consists of minute, irregular, flat particles that are held together by molecular adhesion. As water molecules enter the gap between clay particles, the distance between particles expands and with sufficient water, the clay will turn to mud. Put pressure on mud and it squishes out. It just won’t support anything.

Anyone who has dug a hole in Dallas soil and then attempted to refill it with all the clay soil knows first hand that it is impossible to tamp and compress the soil. Typically there is ten to twenty percent more soil than the hole will hold.

Sandy loam is a soil well suited to residential building sites. Particles of sandy loam are round and nestle together into a tight matrix. Add water, and it passes around the particles. Unfortunately, most of our soil in the Dallas area is clay and not sandy loam.

Also, the moisture content of clay soil under a foundation is often uneven. Drying facilitates consolidation. This is why we often find that the southwest facing part of a foundation, which is drier due to hot afternoon sun, tends to drop faster than the center or northeast facing part of the foundation.

Another factor is that the soil adjacent to a foundation is consolidating. When the soil is on a hillside, it has a tendency to drop down the slope.

Builders have long recognized that soil consolidation is a leading cause of the need for foundation repair. Over the past forty years, builders have added ever more robust supporting beams at increasingly closer spacing. The underside of a foundation is beginning to resemble an egg carton.

With time, however, there is still a weakening of support by the clay because of uneven consolidation under the foundation.

While soil watering is one essential part of maintaining a foundation, one cannot overlook the destructive role that soil consolidation plays.

It is easy to recognize a neighborhood that has been poorly prepared for foundation construction. With the passage of time, the sidewalks and driveways will become uneven.

While a lot of attention has been paid to foundation watering, soil consolidation is a leading cause of foundation failure. The foundation problems of Dallas, Allen, Frisco and surrounding areas often can be traced back to poorly prepared clay soil.