Pier and Beam Foundation is one of the most commonly used foundations for homes. Although there are other options available including post-tensioned slab on grade or plain slab on grade, in most cases, the ideal choice is a pier and beam structural foundation. Issues with movement are generally not a problem with pier and beam foundations, but they can occur if there are issues related to water damage, excessive moisture or construction failures.

A pier and beam foundation consists of piers that are embedded into the ground at an average space of 5 to 6′ with a perimeter concrete wall which acts as the beam. The beam, which encloses the crawl space created by the pedestals, supports the wood beams that make up the floor and wall framing. Generally speaking, the weight of an average house is spread over two to three dozen piers.

Problems with pier and beam foundation generally occur due to decaying piers. This happens when there is less wood mass. When the wood decays, that area becomes soft thus creating a void between the wood and the soil. When this happens, the pier and the wood framing settles.

Another major reason why a pier and beam foundation moves is due to water. When there is moisture, the wood pedestals decay and the soil that supports the wood swells up as the level of water increases. When this happens, the soil swells up too, and the foundation begins to move.

Weather can also play a role in shifting the soil beneath a foundation. Too much rain or too much drought can both have a negative impact. As we experience global warming, there are changes in the climate that we have to deal with.

According to the National Oceanic and Atmospheric Association, we now face extended dry periods which are then followed by excessive rain. These random weather conditions and the constant switch from hot and dry weather to rainy and/or cold weather can have a significant impact on the foundation of buildings and homes. Structures can shrink or swell; they can pull away or simply collapse. All these can cause movement.

Construction-related issues such as building the structure on unstable ground or making some major errors and failing to build a proper foundation are also reasons that pier movement could occur. 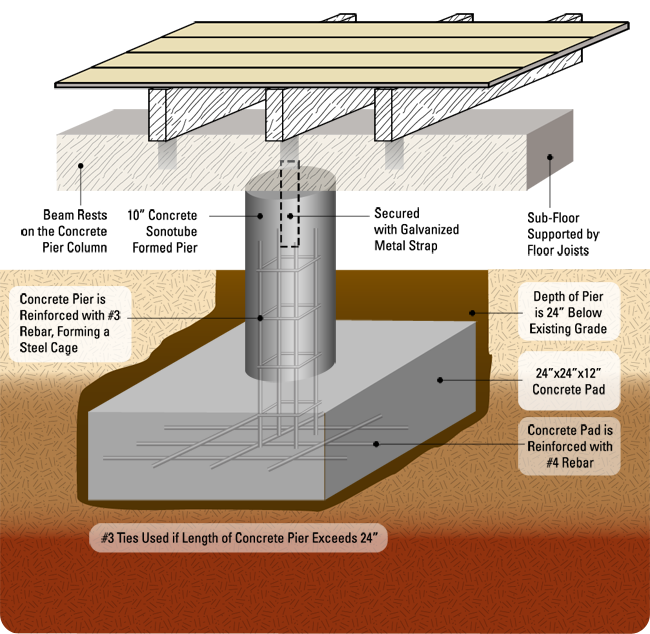 There are a few strategies that can be used to prevent movement and leveling issues.

It is important to keep an eye out for any signs that would indicate that the soil beneath the foundation is slowly damaging away. If these signs are not monitored, there is a risk that the foundation would crack and sink and the structure of the home would become unstable. People tend to spend a lot of money on stabilizing the foundation, but if it’s not done right, they will need to install more piers so that further cracking and/or crumbling could be prevented.

Other signs to look out for include creaking sounds, cracks in walls, breaking tiles, popping grout, difficulty in closing doors or windows and bowing basement walls among others.

It is estimated that homeowners spend nearly $4 billion annually to stabilize or improve their home foundations. If you are one of those homeowners, you need to ensure you take action fast. This means that you recognize the tell-tale signs and then you hire a foundation repair company that has a team with the necessary skills and experience to fix the problem. You don’t want to end up with sub-standard repairs because you will eventually end up spending even more on additional repairs and the cycle will continue till you find people who know what they’re doing and who can offer you a long-term solution.

The two most common reasons for pier and beam foundation movement continue to be moisture and structural dis-balance. It is important to maintain a constant level of moisture, and it is also equally important to ensure that the foundation is done properly in the first place. All these factors can help prevent movement problems in the future.